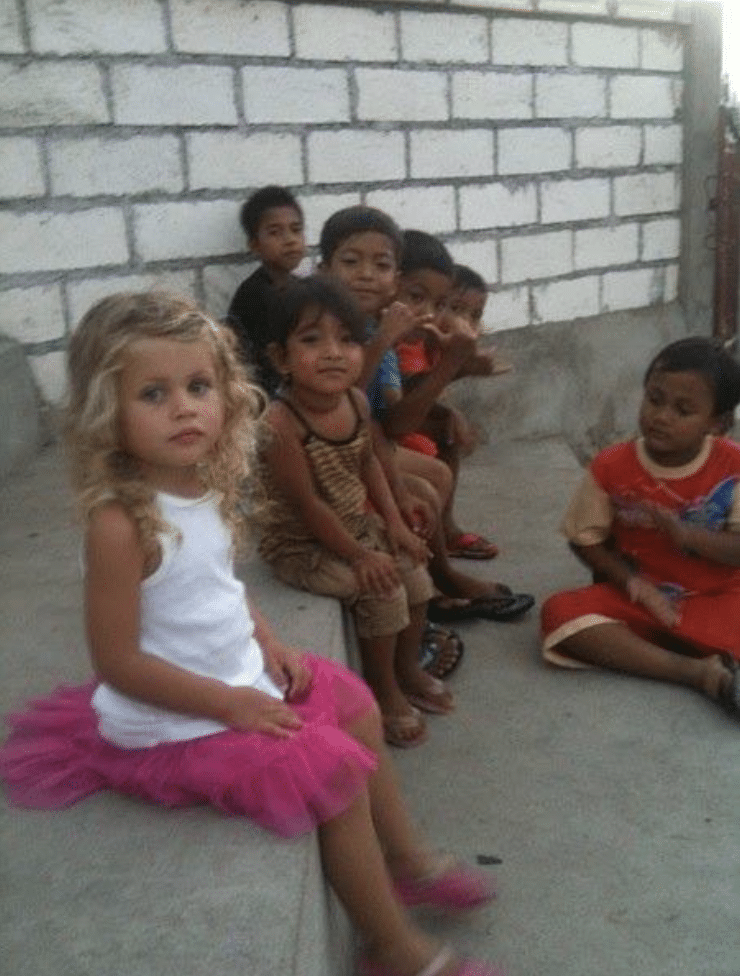 When Rhonda wrote this post on the Unstoppable Family blog…who knew it would still be ringing true today. Let us know what your thoughts are with a comment below.
. 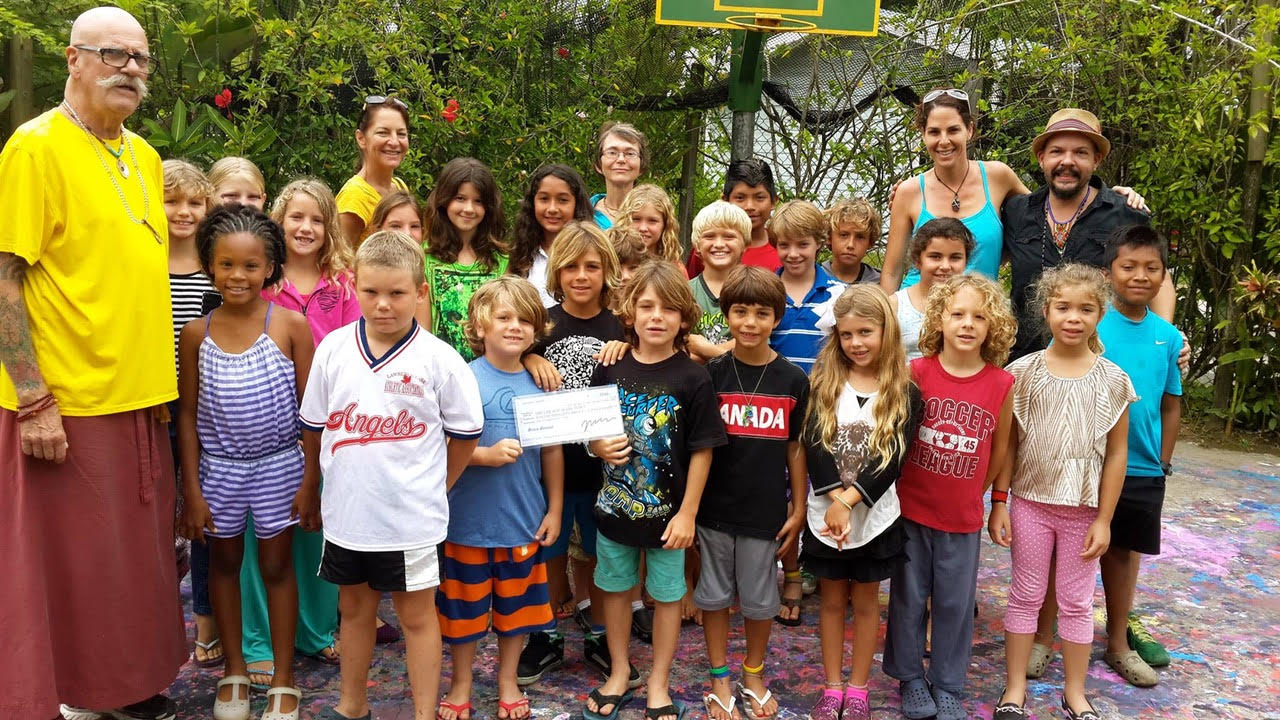 What can travel do for a child?

She was born in California and stayed until she was 1.5 yrs old and traveling ever since.

Her birthday parties can be describes as a “muli-cultural smoothy” if you will, blending a multitude of cultures, ethnicities and genders all together to make a delectable treat.

You watch in amazement as she moves between multiple languages and cultures while collecting her gifts . She has celebrated birthday’s in Bali, Fiji, Florida, Panama, & California so far.

When we took that first 3 month world tour around South Africa, Australia & New Zealand, we were thinking this was the last trip before children. We would come back, settle down and start a family. 1.5 years later we found ourselves back in a foreign country..

Yet this time a baby in tow and diapers in our suit case.

While our friends back home were recreating their own childhood with their families, life as an expat, traveling parent is very different.

But traveling and living abroad with your family can be the most rewarding thing you’ll do together. You just need to make a few preparations and adjustments.

Who are the Expat/Traveling Kids?

Some children think a nomadic life is normal; they’d put any Khao San road backpacker to shame. It’s all they know.

Children from military, missionary and now online business families like “The Unstoppable Family” clock up the miles, sometimes before they’re even old enough to understand what’s happening.

Researchers working with these children call them ‘Third Culture Kids’.

They discovered that children take what they know or remember from their home culture, and mix it with their host culture to make a third mixed-up bag that works just fine for them.

So, for example 90% of those recently surveyed said they felt they understand foreigners better than the average American and 80% said they can make friends with anyone.

What is important to an expat/traveling child?

Well, you need to listen to them. Your own relocation or travel issues might seem bigger but knowing that Santa will find her is a big deal for a 6 year old, and sometimes it means going back to a place that is more known for them during a holiday like Christmas.

Take the time to find out as much as you can about the new culture so you can recognize things like tasty fruit or dangerous spiders and order your favorite foods at a restaurant.

If your children look radically different to the people in your new home, be ready for some healthy curiosity and prepare your kids for life as a minor celebrity if you’re moving to a rural area.

I will never forget when we moved to Fiji, and Hanalei was the stand out child everywhere we went, with her blond hair and blue eye’s, but at 3 kids are just kids, they have no judgements or fears.

Playing games is a big part of life for many kids too, but ice-hockey isn’t big in the tropics and the football isn’t quite what you’re expecting. Talk to other expat parents online and find out what they do and how to join in.

We met a little girl and her Mom at the Beach in Puerto Escondido, Mexico and while the girls were playing she asked if Hanalei wanted to join in a local ballet class. We joined them for ballet for 6 weeks at a small local church and it was one of the best experiences for both of us.

What language should you speak abroad?

Sure, you will find someone that will speak English, and have other expat friends that speak english, but do you want your kids to continually impose English on their friends or learn some local words?

Even a six-month stay can leave them with an appreciation for the way the non-English speaking world runs, and give a child the confidence of a powerful lion in the jungle. (even at 6)

We make a point to have Hanalei order her own food, walk up to ask for the check and buy things on her own using the local currency and language. In the beginning it was difficult and she was shy, but once she realized we were learning too, and that people loved to hear her speak spanish she wanted to more and more. 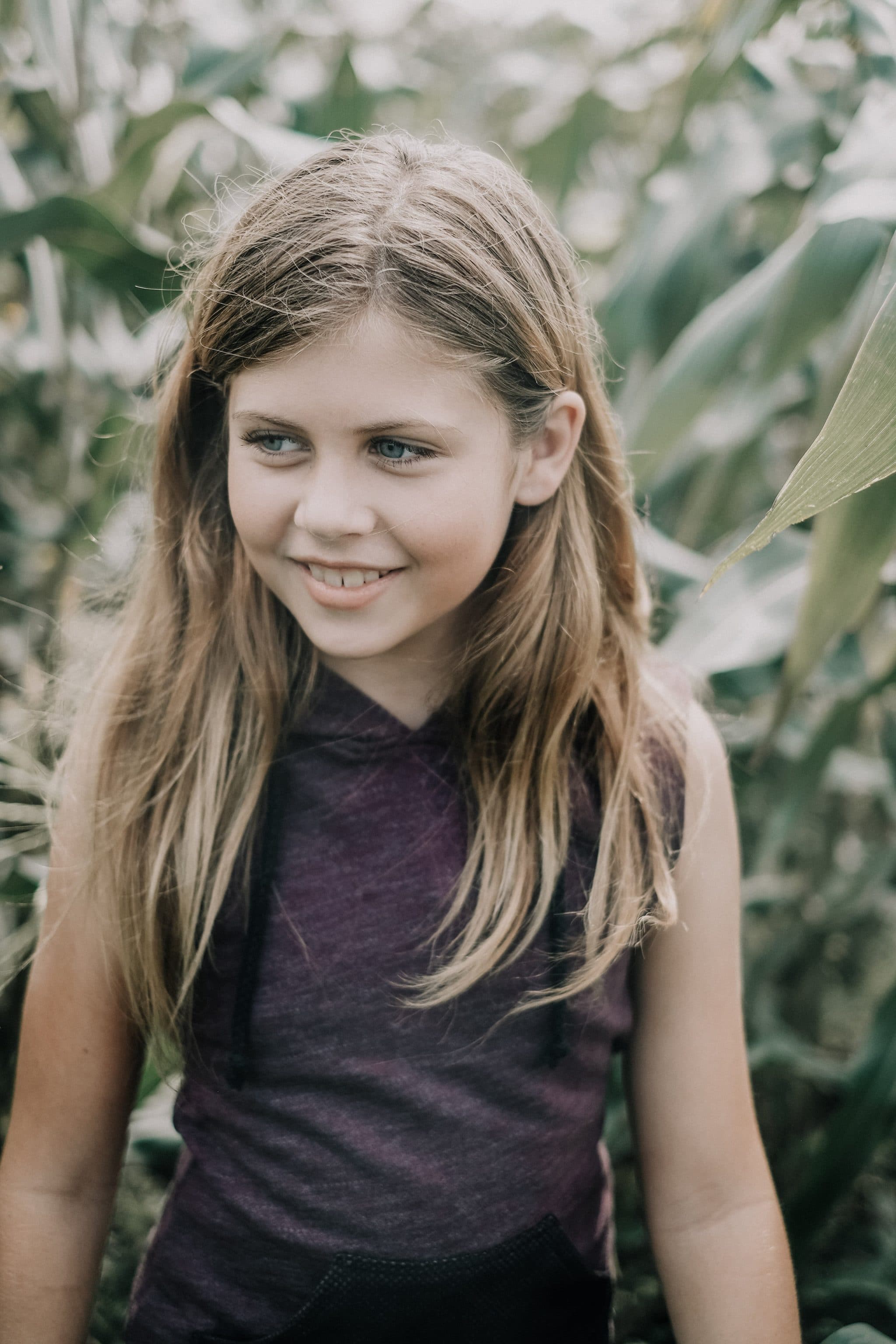 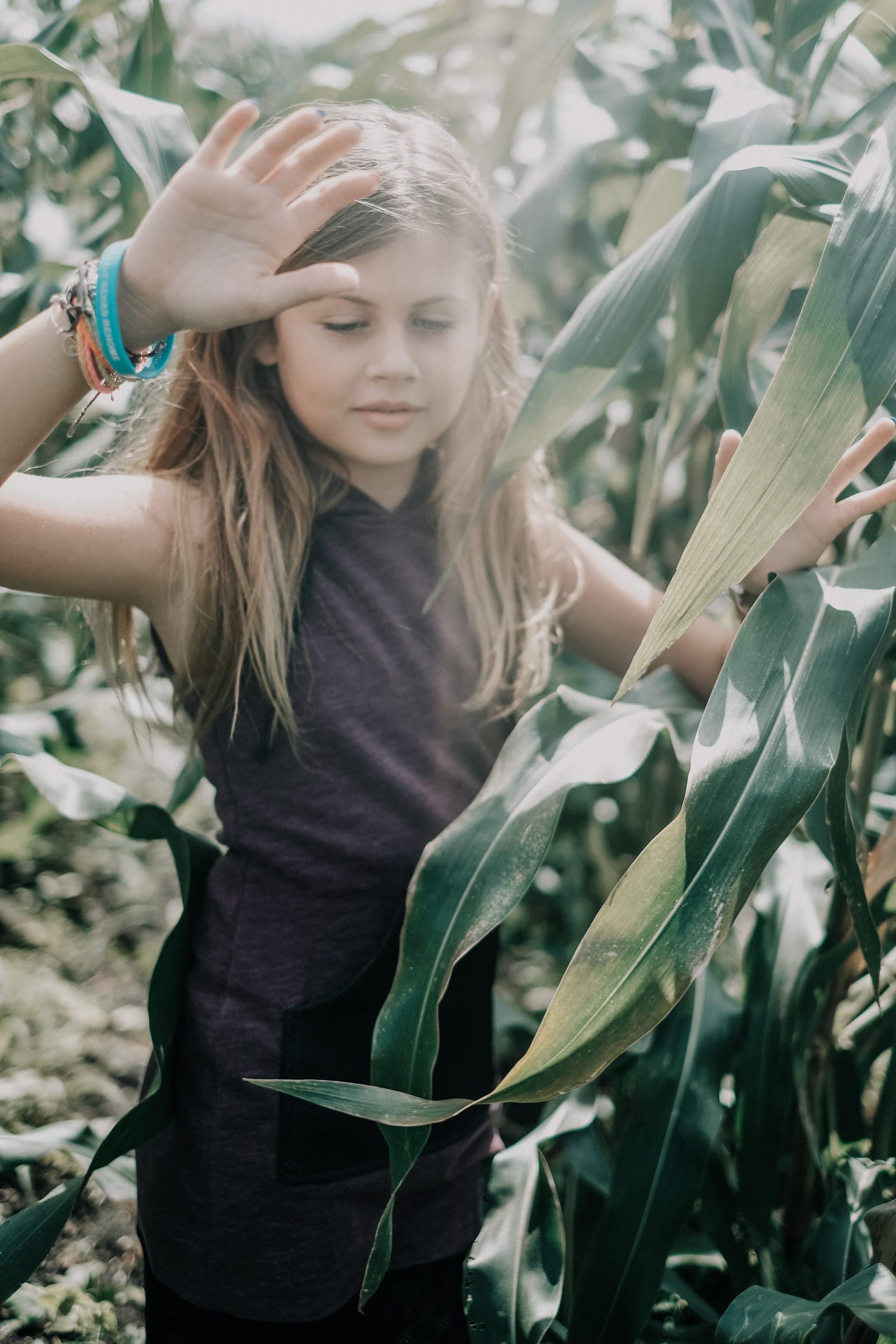 Your choices for longer stays usually include:

The familiarity of English and the curriculum are the benefits of the international school system. Most countries have American schools and if not, then the UK system comes a close second. While we are in Spain we have opted for a British International School with Spanish as the second language taught.

Your kids can mix with other expat children and their local classmates are the perfect way for your kids to find out what the country is really like.

But because of the exclusive nature of most of these schools, some parents take the local option. If your kids are younger and not facing exams, then this could be a great experience for them with guaranteed local friends.

Up until this year we have had the luxury of finding private international schools for Hanalei to attend before she started “real” school. She was able to drop right in and interact and learn from the children even if the language was not english.

But do remember that their first weeks here can be more challenging.

Being the new kid on the block is never easy, and if they don’t speak a word of the language, it can be frustrating.

Hanalei has attended school in Bali with very little english spoken, Peru with no english, Brazil with only Portuguese and now Spain with both english and spanish. I can tell you, she has never once complained about not understanding or feeling frustrated.

Play has no language barrier.

I do believe this year, being 1st grade it was necessary for her to be taught in English as the primary language. This way she was learning to read and write in her native language and have spanish as the secondary.

The third option is home-schooling, which is easier than ever before, with so much support online. Home-schooling is a good choice in countries where enrollment can be a challenge or if you are moving around for more frequently.

For the last 5 years we have been staying in one location for 4-6 months and she would change schools as we moved.

Now that she is in 1st grade we made the decision to stay in one place for the school year and take “mini vacations” during the year, because Hanalei told us she did not want to home school.

She likes attending schools and meeting children her age.

So it is very important to listen to the needs of your child when traveling abroad and choosing their education.

Don’t stress too much. Most expat kids are incredibly well-adjusted and have friends all over the globe. They get to visit worlds that most teenagers just see on television and are comfortable with traveling in a way many older people only dream about.

Hanalei has the biggest heart and the most open mind I have ever seen in a child or an adult for that matter. She is in love with learning new things and meeting new people. Traveling has made the world so small in her eyes, and she believes she can and will see every country on the globe because they are just a plane trip away.

But it’s not just about travel; these kids tend to be more tolerant than children raised in only one culture. They do not judge color or race. They grow up understanding compassion, and empathy with no judgement .

They look at the world as a beautiful place, not a place of war or destruction.

I am excited to see more children like Hanalei and learn about children and their experiences traveling the world.

Cheers from her Fashion Studio at Hanalei Swan-HS Styles 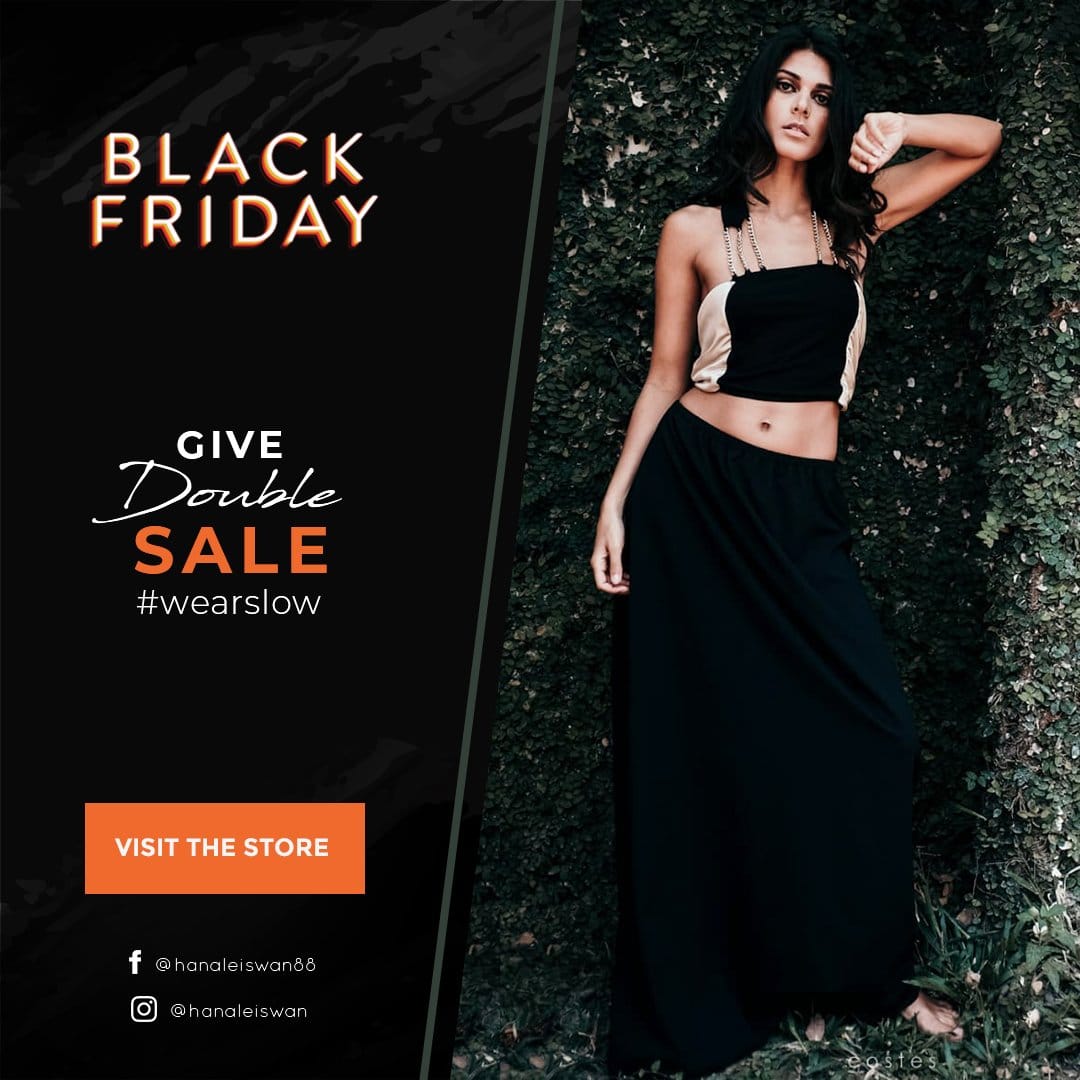 Be in the loop for the latest collection releases, fashion shows, and speaking engagements